On November 13, the Leaders in Family Enterprise class welcomed Niki Russ Federman and her father Mark Federman to Ithaca. Niki is the 4th generation co-owner of the venerable Russ & Daughters family business. For over 100 years, Russ & Daughters — and now the Russ & Daughters Cafe — has been an integral part of the history of New York City, a touchstone in the lives of generations, and the torchbearer of Jewish food in America.

Jonatha Boyarin, the Paul and Bertha Hendrix Director of Jewish Studies and Diann G. and Thomas A. Mann Professor of Modern Jewish Studies, offered to welcome Niki and Mark to campus with the following encomium, which also provides a superlative context for Russ & Daughters, not only the physical community that it resides in, but the cultural and spiritual community that it has served for over 100 years now.

When Dann Van Der Vliet wrote to me to tell me that Niki Russ Federman was coming to visit Cornell, I immediately wrote back offering to deliver an encomium to Russ & Daughters from a longtime neighbor and customer. Dann accepted. Then I realized that I wasn’t quite sure what an “encomium” is. I think it’s a good thing, but does it have to have a specific form, like maybe iambic pentameter? Does it have to actually be in Greek? Turns out I’m off the hook: an encomium is simply a speech or piece of writing that praises someone or something highly. That I know I can do, but I’ll just do it for a minute or two, since Niki and Mark are the people you really want to hear from.

When Elissa Sampson and I moved into the Lower East Side in 1979, it was a haven for both retail and wholesale food. There were dried fruit and nut purveyors like Wolsks and Yavarkovsky. The only one left is Economy Candy, like Russ & Daughters, a healthy multigenerational business that’s still lively and open on Rivington Street. And there were still a few businesses functioning there of the kind called “appetizing stores.” These stores might have sold cheeses, maybe some pastries, maybe bagels and bialies—more of them, of course, on Sunday mornings than any other time of the week. (By the way, does everybody know what a bialy is? It’s short for Bialystoker pletsl, for the city in Poland where this form of bread originated: bagel-sized, not boiled in water like a proper bagel, but with a depression in the center filled with a bit of fried onion. Absolutely delicious, tam gan-eden as the Yiddish phrase has it.) There was Scottie’s, on the corner of Essex and Houston, with open jars of pickles and herring right on the sidewalk; there was Schacht’s on Second Avenue, run by a fellow named Max who had served in the Russian Navy during World War I. And there was Russ & Daughters on Houston Street itself. Much of the food they sold were old-world delicacies that somehow became especially associated with Jews in America—like lox itself, pastrami, and seltzer water.

Russ & Daughters was at that time — correct me if I’m wrong — already a 3rd-generation family business. Mark, were you running the show yet at that time? It was a place that looked just right for its time and place, keeping up traditions of quality without being overly stuck in nostalgia. And when I say quality at Russ & Daughters, much of what I have in mind is the extraordinary skill of the women and men who slice smoked fish to order—paper-thin, transparent, with the work done right before the eyes of demanding customers.

These men and women are experts, too, sometimes passing their own craft down through the generations, as with Herman the uncle and his nephew, who stands now at the same counter where Herman stood forty years ago. Sometimes ordering can be a bit intimidating; knowing just how to order. One time, more than three decades ago, I walked in and asked for “half a pound of belly lox.” I was told in no uncertain terms that “you don’t have to say belly lox; that’s the only kind of lox there is, because the belly is the fatty part, but all of the other parts of the salmon are smoked.” The next time, chastened, I asked for half a pound of lox, and was told in equally uncertain terms that I have to specify what kind of lox I wanted: “There’s all kinds, there’s belly lox, nova, Gaspe . . .”

It’s worth it, believe me, for both the food and the human interaction. Scotty’s and Schacht’s are long gone, and they’re missed, along with so many other Jewish and other ethnic specialty food and general family businesses on the Lower East Side. The Russ and Federman families stuck it out on Houston Street through some tough decades, sustained by loyal customers who made it their business to get there even when the neighborhood was reputed to be unsafe. Those customers knew what they were getting, and they could get it almost nowhere else. Today the original retail stores is jammed, especially on weekend mornings—if you don’t “take a number” when you arrive, you’ll never get served–and Nikki presides over a growing empire. She’ll tell you more about how they kept it going, and why it made so much sense to expand in recent years. High praise indeed, then, to Russ & Daughters and to the generations that keep it going as a vital part of what makes New York still the greatest city in the world.

A Taste of Family Business

Cornell alum and students on hand

The SFBI at 5 years old

Congratulations to our new Cornell Family Business Club Board members: President - Siddhant Tyagi VP of Events - Lauren Turner VP of Finance - Tarandip Kahlon VP of Marketing - Param Kandhari VP of Student Relations - Emery Schoenly #CornellMBA #CornellBusiness #CornellFamBiz
The SFBI connects students and alumni from #familybusiness from across the globe. Kevin Leichter ‘97, CEO of Premier Paint Roller, shared a lively breakfast with Param Kandhari MBA ‘21, and Prasad Batchu MBA ‘20 recently. #CornellSHA #CornellMBA
The Smith Family Business Initiative invites you to a special one-day Master Class with Cornell Family Business Scholar Dennis Jaffe, PhD. This master class has been specially designed for those that work most closely with family businesses; as consultants, advisors, legal counsel or directors. Advisors are all called upon to help with the challenges families in business face through the generations. Advising the Family Enterprise: One-Day Master Class, will be held at the Tata Innovation Center, on Roosevelt Island on Friday March 6, 2020 from 9:00 AM – 5:00 PM. Registration details at link in our bio. #executiveeducation #cornellmba #cornelltech #familybusiness #familyoffice
Whether it’s Ithaca, Roosevelt Island or anywhere in the world, a “warm” welcome back to all of our amazing students. #cornellmba #cornellsha #cornelldyson #cornelltech #cornellbusiness 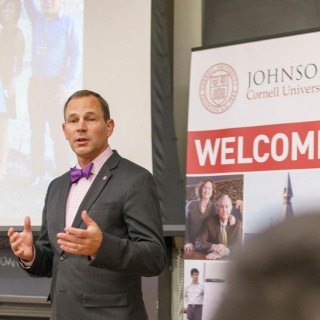